Young female Nigerian writers, of recent are making sensational waves around the world. They have brought in a fresh perspective to the art, and are heralding a renewed appreciation of Nigerian literature abroad as well as in Nigeria. A good measure of their impact on the contemporary Nigerian literary scene is the numerous international and national awards and award nominations they've harvested in the past two decades. Among this new bloom of female Nigerian writers who are making us proud is award winning Nnedi Okorafor. She was born in Cincinnati, Ohio in 1974 to two Igbo parents who emigrated from Nigeria in 1969. After earning a BA in rhetoric at the University of Illinois in 1996 and an MA in journalism from the Michigan state university in 1999, she moved on to obtain her MA in Englishfrom the Chicago state university where she is now a professor of creative writing.

Nnedi's debut novel  Zarah the wind seeker appeared in 2005. The Novel which was published by Houghton Mifflin was the winner of the 2008 Wole Soyinka price for literature in Africa. The wind seeker made it into the Parallax awards and the Golden Duck and Garden State Teen Choice awards as a finalist. Nnedi was also the Winner of the 2007/2008 Macmillanwriter’s prize for Africa. Her fantastical Novel WHO FEARS DEATH is currently being converted into a movie by award winning director, WanuriKahui. A shining example of outstanding success and self-determination, this striding Amazon lives in the Chicagosuburbs with her daughter. Enjoy this chat with her.

You were born in the US, is that correct?
Yep, i was born in the US, Cincinnati, Ohio. From the age of 7,my parents started  taking me and my siblings to Nigeria, so while I had a American experience, I had a Nigerian one too.

It’s clear that had a big influence on your writing. How did you come about your love for the magical and speculative?
The magical and mysterious in my work is merely a reflection of how I see the world. It’s been there from the first story I wrote. The science fiction interest came later when I started wanting to see Africa in the future and an Africa that reflected the one Iknew. Clarion sparked everything, whenI arrived at the clarionschool of creative writing, met these other people writing fantasy and science fiction, this really crazy stuff, andI thought, oh these are my people! These are who I belong with. This is who I am.

Talking about science fiction, why do you think it hasn’t made further inroads in Africa?
I guess people write what they know, from my experience with Nigerians, most don't read stuff specially characterized as fantastical. Ben Okri, AmosTutuola, even Chinua Achebe...their work has fantastical elements,definitely,but the categories of science fiction almost aren’t in Nigerian vocabulary. I think that part of why i am able to write science fiction is because i was born and raised in the United States. Thus I have been exposed to this specific style of writing, along with African literature with fantastical elements. Maybe this category doesn’texist in Nigeria because it’s not needed. The fantastical is naturally a part of the Nigerian World Already. 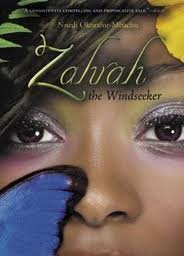 Most of the major characters in your stories are female; does this in any way support the view of you as a feminist writer?

I have been called a feminist writer and that’s correct. I'm a feminist, a womanist,pro equality, all of that. What’sinterestingisthere’s always a little conflict between my womanist side and my feminist side. For instance there was a scene in one of my novels (who fears death) about female circumcision ,andI was trying to Get to the root of it. It’s a horrible practice, but it’s a complex thing. You can’t go into somebody's culture and say something is wrong with what you are doing...you should stop it, without respecting their culture first. I have been accused of being pro female circumcision because of the way Iportrayed this incident. I think even if you look at it in a non judgmentalway, you can see its rotten. So there is a cultural conflict, when it comes to feminism and how I identify with myself. I'm the extreme side of feminist and when I come to Nigeria I'm yelling about everything. And then when I return to the states, I am defending Nigeria. Its that whole being in the middle of things.

Who were your influences?
I grew up reading Stephen king. He taught me to love story telling. The first book of his that I read was it. Scared the heck out of me.

In July, you were one of the VIPs invited to witness the final launch of the historic space shuttle, Atlantis at the Kennedy space centerFlorida. Can you tell us more about this experience?

It was a fascinating experience. And you know, I’vealways wanted to write about space travel.. It was the final space launch for NASA, ending three decades of crewed flight into earths orbit. It was a chance to see an exercise in American technological greatness. I got to the space centre with my daughter two hours early. We had to wait with other  visitors for about two and half hours listening to the official say wonderful things about the space shuttle program of NASA, before the thirty minute count down began. It was miraculous. Then it started to dawn on me that the gigantic shuttle on the Pad 39A would actually take off. We were there to witness history. There was festivity in the air as it seemed to dawn on the people around us too. Every time the clock stopped for whatever reason, we all held our breath, when it restarted..we all applauded. I focused on the launch pad,3 miles from where we were. I had two cameras, butI wanted to see the craft take off with my own eyes. 10-9-8-7-6-5-4-3-2-1 and blast off! Ones everyone saw the plumes from the exhaust people started cheering.. It was an exhilarating moment, Imean, it was actually happening in front of me. I've seen launches plenty of times on TV but this felt real, so real. It was right there in front of us. I was tingling with astonishment and fear. It was so close. Up, up,up, it went. Then it punched through thethinning clouds and then it was gone. You could see its shadows reflecting on the clouds. It took less than a minute, but it was absolutely awe inspiring. I had watched human beings leave the earth and it was beautiful.