THE MAN THAT CLAIMED HER 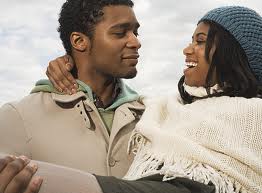 He was finally putting his life back together after the tumults of the last seven months. He was emerging, as a butterfly would, from the cocoons of his past. A past that shaped him into the man he now was. He'd fought through it valiantly, he'd lost some things, but he'd also gained from the lessons learned. They were now the pillars of his new found self confidence. He'd visited the church that day not because he was in search of salvation. He'd found salvation, what he needed now was the companionship of fellow believers. The worship was rapturous, the sermon was uplifting. It put fire under his feet, and strengthened his resolve to live life to the fullest. When it was time for first timers to be acknowledged, he didn’t hesitate, like he would have done seven months ago. He was a new man now. He stood up, towering above the congregation, a smile on his lips, a sparkle in his eyes. He shook their hands enthusiastically as they welcomed him into the fold. The choir sang a song.
You are somebody
You are special
You are welcome
We love you..
It was an emotional moment for him, he'd never felt such warmth.

She was the social butterfly kind of girl, the kind that hugs every one after service. She had the most charming smile, the most endearing eyes. Angela was so full of life; she was the darling of the church, the angel of the choir. She was every where, giving a pat there, a hug there, or a word of encouragement to someone needing such. She was a beautiful soul, a transcendent beauty that shone through her eyes and lit up her face. There seemed always to be an aura of light around her as she floated around the church, performing her Angelic duty.

When she came to shake his hands, she'd beamed her whole soul at him, it poured through her eyes, through her smile, she hid nothing, held back nothing. His smile met her smile and she smiled some more.

"You are welcome" she said, "my name is Angela, what's your name?"
"I'm Gini" he replied.
He hesitated, still holding her hand and looking into her eyes, then he added "And I'm pleased to meet you."

She'd patted him on the shoulders and said "see you around" before drifting into the crowd; she slid through it, a peck there, a hug there. He watched her. She reminded him of a movie star he'd had a crush on as a kid. There was something about her that went out to him, drawing him in, irresistibly. His chest tightened beneath his shirt, whatever air he had in his lungs was gone. She'd taken his breath away in those few moments. He recognized the feeling, one he wasn’t sure he was ready for. He knew it wouldn’t be long before she took over his entire being, thought, fiber and sinew. He'd gone home that day feeling light, the week crawled slowly as ever and thoughts of Angela lingered somewhere in his mind, tempting, persisting, refusing to go away. He nudged them gently back, like a shy little boy, but they floated around, seeking to permeate the sacred regions of his consciousness. He did yield to them occasionally, in those moments before sleep. They seemed to have a therapeutic effect on him. He was no believer in Telepathy, but he'd played with the idea that Angela could hear his thoughts, that she'd followed them into his room on those nights and floated over his bed, an invisible angel pacifying his sleep. Sunday came and he went to church early. He managed to stay focused through the service but his eyes strayed one or twice to the choir section, where Angela sat as magnificent as ever, leading hundreds of voices in awesome worship. Their eyes met once during the service and a knowing smile passed between them, he gave her a slight bow, one of nobility. He raised his rich baritone to meet her soprano; another beautiful music had been born. No one could hear it, only Gini. Hundreds of voices were singing the same song, but all he could hear was their own song, her soprano ringing in the skies, his baritone shepherding it, accompanying it, heaven bound. She came to him after service again. This time she hugged him and enquired about his week. They exchanged numbers and talked some more. He got to know she lived on the street next to the church and she got know he worked in advertising.

Angela lay on her bed trying to decide whether to make the call. She wanted to hear that deep baritone again, it soothed her, comforted her. There was a nobility about him, a gentleness that appealed to her. She could remember that first day; she’d been struck by his height. He was six foot plus, dark, extremely handsome, with an aristocratic head that rested on a slender neck supported by very broad shoulders. He was slim. She'd noticed his long arms when she shook him. There was a softness about his palm that had her wondering if he'd ever handled a broom. His eyes were a dull brown and had an intelligent disconcerting look in them. They'd drilled into her soul from their sockets, unearthing her vulnerability. They were eyes that said much, eyes that held much experience in them, experience well beyond his age. They were eyes she knew she could trust. So she did not look away, she held his gaze and let him see through her.

She made the call.

"Hello" said the voice on the other side. "My God!”, Thought Angela, “He even sounded better on phone!"

"Hello good evening Gini" she managed to say.
"Good evening Angela, what's up?"
"I'm fine and you?"
"Great"
"I just wanted to say hi"
"O that's so kind of you, what are you doing at the moment?"
"Nothing, just lazying"

They both broke into laughter. Their voices mingled over the phone, their worlds merged in those few moments. A new chapter had begun in their lives, they both knew it. There was now a blank page before them and they had to fill it.
Angela replaced the receiver and lay back on the bed.  It was going to be a long week. Sleep came quickly; it carried with it a soothing message, a soothing dream.

we love to read your comments!