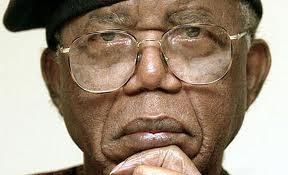 Mr. Achebe, 82, died in the United States where
he was said to have suffered from an undisclosed
ailment. According to a report by PREMIUM TIMES


he died last night in a hospital in Boston, Massachusetts,
United States. A source close to the family said the
professor had been ill for a while and was hospitalized
in an undisclosed hospital in Boston. The source
declined to provide further details, saying the family
would issue a statement on the development later today.

Until his death, the renowned author of Things
Fall Apart was the David and Marianna Fisher
University Professor and Professor of Africana
Studies at Brown.
The University described him as “known the world
over for having played a seminal role in the
founding and development of African literature.”
“Achebe’s global significance lies not only in his
talent and recognition as a writer, but also as a
critical thinker and essayist who has written
extensively on questions of the role of culture in
Africa and the social and political significance of
aesthetics and analysis of the postcolonial state in
Africa,” Brown University writes of the literary
icon.
Mr. Achebe was the author of Things Fall Apart,
published in 1958, and considered the most
widely read book in modern African Literature.
The book sold over 12 million copies and has been
translated to over 50 languages worldwide.
Many of his other novels, including Arrow of God,
No Longer at Ease, Anthills of the Savannah, and
A man of the People, were equally influential as
well.
Prof Achebe was born in Ogidi, Anambra State, on
November 16, 1930 and attended St Philips’
Central School at the age of six. He moved away
from his family to Nekede, four kilometres from
Owerri, the capital of Imo State, at the age of 12
and registered at the Central School there.
He attended Government College Umuahia for his
secondary school education. He was a pioneer
student of the University College, now University
of Ibadan in 1948. He was first admitted to study
medicine but changed to English, history and
theology after his first year.
While studying at Ibadan, Mr. Achebe began to
become critical of European literature about
Africa. He eventually wrote his final papers in the
University in 1953 and emerged with a second-
class degree.
Prof Achebe taught for a while after graduation
before joining the Nigeria Broadcasting Service in
1954 in Lagos.
While in Lagos with the Broadcast ing Service, Mr.
Achebe met Christie Okoli, who later became his
wife; they got married in 1961. The couple had
four children.
He also played a major role during the Nigeria Civil
War where he joined the Biafran Government as
an ambassador.
His latest book, There Was a Country, was an
autobiography on his experiences and views of
the civil war. The book was probably the most
criticised of his writings especially by Nigerians,
with many arguing that the professor did not
write a balanced account and wrote more as a
Biafran than as a Nigerian.
Mr. Achebe was a consistent critic of various
military dictators that ruled Nigeria and was a
loud voice in denouncing the failure of
governance in the country.

Twice, he rejected offers by the Nigerian
government to grant him a national honour,
citing the deplorable political situations in the
country, particularly in his home state of
Anambra, as reason.

Poetry
Beware, Soul-Brother, and Other Poems (1971)
(published in the US as Christmas at Biafra, and
Other Poems, 1973)
Don't let him die: An anthology of memorial
poems for Christopher Okigbo (editor, with
Dubem Okafor) (1978)
Another Africa (1998)
Collected Poems Carcanet Press (2005)
Refugee Mother And Child
Vultures
Essays, Criticism, Non-Fiction and Political
Commentary
The Novelist as Teacher (1965) - also in Hopes
and Impediments
An Image of Africa: Racism in Conrad's "Heart of
Darkness"
(1975) - also in Hopes and Impediments
Morning Yet on Creation Day (1975)
The Trouble With Nigeria (1984)
Hopes and Impediments (1988)
Home and Exile (2000)
Education of a British protected Child (6 October
2009)
There Was A Country: A Personal History of
Biafra, (11 October 2012 )