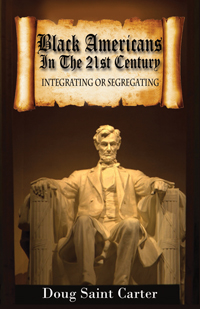 If it had been Barack Obama instead of Jesse Jackson that ran for president of The US in 1984, chances are that he would have won. This is not to discredit Jesse Jackson in anyway, but to draw attention to an important determining factor in the election of Barack Obama. In 1984, sixteen years after the assassination of Dr Martin Luther King, Jesse Jackson accepted the nomination of the democratic party to run for president. However, Jesse Jackson never made it beyond the primaries. Twenty four years later, Barack Obama, against the odds stacked against him - his skin colour and  the fact that he was largely unknown on the national stage - ran for the presidency and won. What was missing in Jesse Jackson's rhetoric? What happened to Americans in those twenty four years?

To put it simply, Jesse Jackson ran for the seat of a "Black president of the United states" while Barack Obama ran for the seat of  "The president of the United States". This paradigmatic shift from the popular rhetoric of black civil rights movement which formed a large part of Jesse Jackson's campaign rhetoric, contributed to a large part of Obama's election success. In other words, Jesse Jackson came with an "Us against them" rhetoric which isolated whites, in contrast to Obama's Unifying rhetoric as expressed in his speeches. This one readily comes to mind:

"There is no Black America, or White America, or Hispanic America, there is the United States of America."

It would be unfair to wholly attribute Obama's election success to his rhetoric, without taking into cognizance the fact that whites had matured racially in the years that followed the civil rights movements of the 60's. The election of Barack Obama lends credence to the fact that majority of the white population no longer harbored racial prejudices and wanted to demonstrate their racial maturity and tolerance by voting a Black man into the highest political office in the world. By this act, White Americans in the 21st century were sending a message to the world - That all men are created equal, that liberty and justice are the ideals upon which any progressive society is built upon, that they were committed to these ideals regardless of race or creed. Many had hoped that the election of a Black president would bring about the great racial unification that Martin Luther King dreamt about, but that is hardly the case today. What is the racial attitude of Black Americans in the 21st century? Have Black Americans reached the level of racial maturity that Whites have attained? Are Black Americans still angry and why? Should present day White Americans be held responsible for Slavery? What should be done to improve race relations between Whites and Blacks? Are there cultures among the Black population that could be hampering their progress and relationships with other races?

In this book, Black Americans In The Twenty First Century, speaker and author Doug Saint Carter attempts to answer these questions, and shares his experiences, efforts and observations of improving white and black race relations.

The book's first section laments the apparent lack of love between the white and black population, a lack largely traceable to the insistence of Blacks on hanging on to the worst of the past. There is a repetition of the rhetorical question - Where is the love - one that reminds one of the song by Black American music group, Black Eyed Peas. Today's Black Americans may have fallen short of the dream of the Revered Martin Luther king who declared solemnly: "learn to love your white brothers and sisters, do not drink from the cup of bitterness, hate and grudges".

The second section  takes the reader through the experiences and observations of the author during a nine month workshop sponsored by the Jacksonville Community Council JCCI. The workshop was aimed at improving race relations between Blacks and Whites. During the 33 sessions held over a period of nine months, the author writes that while most of the recommendations from the study were aimed at improving the living standards of America's racial minorities, blacks included, they did not in any way improve race relations between Whites and Blacks. He describes the workshop as "A metaphorical ball" which has been formed in recognition of the need to improve race relations, albeit, the ball is yet to be set in motion. Hampering the ball from rolling he notes, is the one sided approach adopted by the workshop facilitators which consisted of both Blacks and Whites. This supports the argument set forth in the book, that racism is not restricted to any particular group.  Racism in the twenty first century has assumed a peculiar character - It is no longer an exclusion of Blacks from their entitled rights as sentient beings, rather it has taken the form of black separatist and divisive attitudes aimed at holding present day whites eternally responsible for slavery. Through out the duration of the workshop, we learn that there is no effort on the part of Black participants to accept responsibility. Improving race relations it seemed, was an exclusive business of Whites, and this attitude though not directly exhibited, was often implied by the reluctance of Blacks to answer a question posed repeatedly by the author: What is the Black population doing to improve race relations with Whites? This question was met with silence through out workshop and in the book, as it progresses in its inquiry, but the need for an answer is deafening. The author sympathizes with the Black population, and recognises that the problem stems majorly from the kind of parenting that Black Americans have received over the years.

He writes, "one thing I have learned in life is that many of society's biggest problems including race relations can be traced to bad parenting... as long as grandparents and parents teach their children not to like whites, not to trust whites, we all loose.... Racism is a learned behaviour. We aren't born racist, so the younger generation of Americans got it from the older and the older have a responsibility to stop."

And this is what this book is about, improving race relations. The level of integration needed for racial harmony, the author argues, can only be attained through the concerted effort of Black and White Americans. On the part of the Black community, an attitudinal change is required - a refusal to subscribe to anger and hatred of present day Whites because of the mistakes of the past.

The book laments the prevalent culture of irresponsibility that seems to permeate the black population - a propensity to blame every stroke of misfortune on slavery, a reluctance to take positive steps to improve their standard of living and do away with self inhibiting cultures like drugs, crime, and lack of education, responsible for the high statistics of Black incarceration, poverty and the likes. Slavery is a thing of the past, and since neither present day Whites or Blacks were involved, it would be unwise to allow it hinder efforts to achieve racial harmony between the two communities.


As the book winds to a closure, it focuses on the role of Black spokes people as role models of the black population. Black spokes people have a responsibility to lead the effort to achieve racial harmony in present day America and should borrow a leaf from Dr Martin Luther King who even at the heat of Black segregation, never supported a grudge culture towards Whites. The prevalent "Divide, separate and group" culture among blacks should be replaced with a more racially tolerant culture and Black spokes people have the wherewithal to encourage and lead this paradigm shift.


Black Americans In The Twenty First Century is a journalistic inquiry into one of history's most pervading ghosts – racism, and its effects on modern day Black Americans. It is a passionate appeal to Black Americans to refrain from drinking from the cup of hatred and bitterness, to replace the animosities of the past with love, and to get involved in the process of achieving racial harmony as America heals from its past and forges into the future. I salute the author's maverick honesty in exploring the theme, his courage to take on such a challenging and sensitive issue, and his admittance to the unpopularity of his stand - a stand made unpopular by its deviation from the racial stereotypes of the past. This is a refreshing perspective, a provoking and most valuable contribution to modern American racial conversation; and I encourage Americans, regardless of race, to take the time to read it. You may not agree with every point made, you may be offended at times by the author's honesty, but you will be challenged to re-examine your attitudes and disposition towards people of other races, and if you are honest enough, I believe you will find the courage to make amends where you need to and perhaps, hasten that day, so eloquently spoken of by Dr Martin Luther King, a day, when we cease to judge each other by the colour of our skin but by the content of our character.

Doug Saint Carter, born in Muskogee, OK is the first born son of W.G. Ellsworth Jr. and Hope Ellsworth. The family moved to Jacksonville, Fl when he was nine years old. He graduated from Englewood High School and attended Jones College where he studied broadcast management, which led to a twenty five year career in radio and some television as an on air personality and management responsibilities. In 1998 he published his first book, described as a labor of love, about the great singer Jackie Wilson, known as Mr. Excitement. The title of the book, "The Black Elvis-Jackie Wilson" created a great deal of racial controversy inspiring the author to become actively involved in efforts to improve race relations. With his new book, "Black Americans In The 21st Century," those efforts continue today.